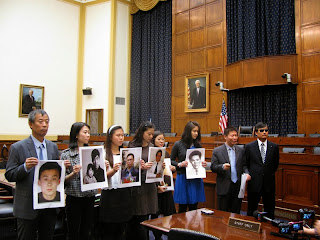 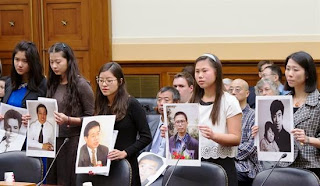 彭明的女儿彭佳音、高智晟的女儿耿格、王炳章的女儿王天安、刘贤斌的女儿陈桥、王治文的女儿王晓丹
Chairman Smith, at right, listens to the riveting testimony of the witnesses. From the left are Reps. Mark Meadows (NC-11), Robert Pittenger (NC-09) and a committee aide. 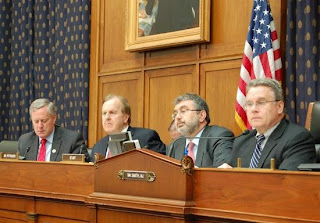 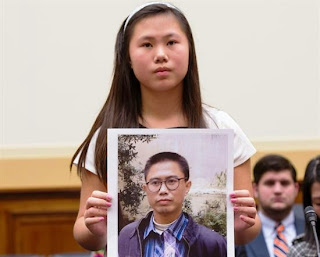 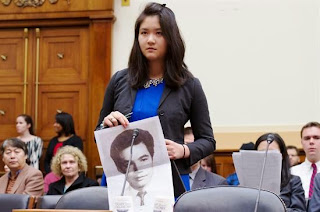 Danielle Wang, holds a picture of her father, Wang Zhiwen, an engineer at the P.R.C. Ministry of Railways, persecuted as a practitioner of Falun Gong. 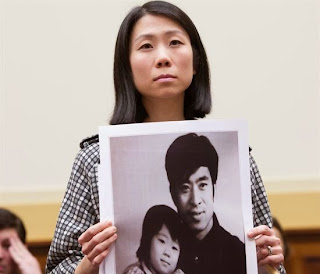 Reporters watch as the witnesses plead for Vice President Joe Biden to speak out on behalf of their imprisoned fathers.
Reporters listen to the testimony of the daughters of imprisoned men in China. 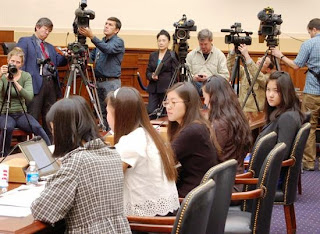 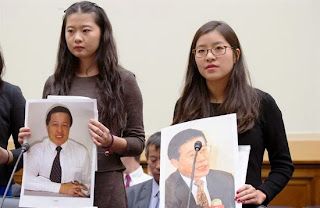 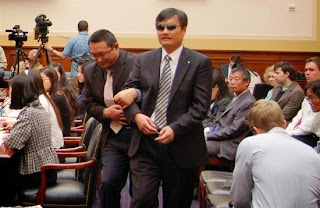 Posters of jailed activists were on display at the public hearing. 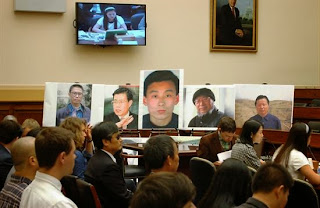 Posters of prisoners of conscience held unjustly by the Chinese government. 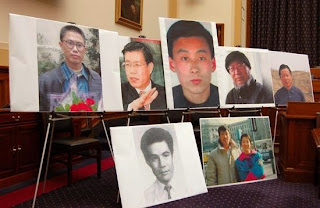 Pastor Bob Fu of ChinaAid testifies before the House panel. 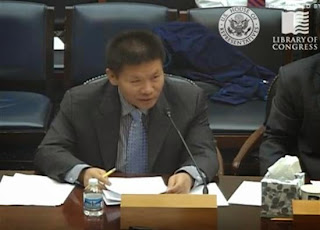 Chen Guangfu, in the U.S. from China for the hearing, and father of imprisoned Chen Kegui. The witness is the brother of renowned blind human rights lawyer Chen Guangcheng. 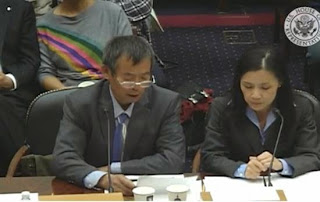 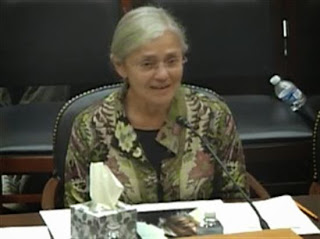 Amid powerful and often emotional testimony, five young women appealed to Vice President Joe Biden, who is now in China, to bring their unjustly-imprisoned fathers' plights to the attention of the Chinese government, and seek their release. They spoke passionately at a hearing held by U.S. Rep. Chris Smith (NJ-04), senior member of the House Foreign Affairs Committee and chair of its subcommittee on global human rights.

"I join with my fellow sisters here today to request Vice President Biden to ask Chinese leaders to release our fathers, and to request an Oval Office meeting with President Obama to share our stories," said Lisa Peng, daughter of Peng Ming. "I know that my dream to be reunited with my father and my father's dream for his country can come true with your support, persistence, and affirmation of the universal and fundamental values of our country: freedom, democracy, and justice."

As a second child to her parents, she dodged the nation's brutal one-child policy, which forces women to undergo abortions against their will for such reasons as failing to have a birth permit, being an unwed mother-to-be or being a second child.

"Because I was a survivor of the one-child forced abortion policy I was considered a non-entity, couldn't go to school and even when my mom would drive my brother to school and I was in the car, the government would have four secret police tailgate us and bump into us as we were driving to school," Peng told the panel. "There was no future for me in China. The fact that I safely escaped and was accepted by the United States, and respected in classrooms, and my voice was heard in classrooms, and I have opportunities—unimaginable opportunities—to do whatever I want in the future and to give back to the community that has given me so much—that's what makes me feel so grateful and hopeful every day."

Peng, who came to the U.S. in 2001 as a political refugees with her father, an environmentalist, an economist, author and a human rights activist, said he was lured by eight Chinese secret police to the border of Thailand and Burma and kidnapped in 2004. After nearly 10 years in prison suffering heart attacks, arthritis, malnutrition, and kidney stones with no medical care, her father perseveres and remains hopeful.

"The Chinese government today is in the business of breaking minds, bodies and hearts," said Smith. "When China bullies, incarcerates, tortures—and even executes—a prisoner of conscience, their entire family and friends suffer an excruciating sense of loss, bewilderment, emotional pain and agony. Often members of the family are themselves subjected to interrogation, mistreatment and house arrest in order to amplify the hurt. In a very real sense, everyone close to a prisoner of conscience goes to jail and lives a seemingly unending nightmare.  Every day, family and friends are left to wonder what terrible abuse awaits dad or mom or a brother or sister or child.  Every day, the tears flow. Click here to read Chairman Smith's opening remarks, made at a hearing entitled, "Their Daughters Appeal to Beijing: 'Let Our Fathers Go!'"

Grace "GeGe" Gao, daughter of human rights attorney Gao Zhisheng said she was grateful she has for the past five years been living in the country with the most freedom in the world, but still feels pain in her heart because of her father's imprisonment.

"Freedom has not yet come to my dad, so it still has not genuinely arrived for me and my whole family," said Grace Gao. "I wish that President Obama and Vice President Biden could mention about my father's name Gao Zhisheng in public occasions and urge the immediate release of my father without conditions. I wish that staffs from US Embassy in China could go to visit my father in the prison. It has been almost a year now that no family or lawyer visit was allowed to see my father."

Gao said policemen took her to school every day, and went in and sat behind her in the classroom. They even went in the restroom with her and did not let her close the door. Her three-year-old brother was escorted to the kindergarten in the police car as well, and his classroom was the only kindergarten room with a surveillance camera.

Gao said she wished people in the world could write postcards to her father. Though he could not see what they say, but the Chinese communist regime "will hear our voice." The "concern and care for my father is the greatest protection over him."

Bridgette Liu recalled the plight of her father, Liu Xian Bin, as a daughter and a witness, and asked the Vice President Joe Biden to help.

"My father has been in prison three times which totals up to 14 years because of his political views," said Bridgette Liu, noting that when he was temporarily released from prison in 2008, it was so hard for him to believe that she had already grown up. He was again taken away from her life by the policemen in 2010. Liu told the congressional panel, at one point invoking the spirtit of Thomas Jefferson and the Declaration of Independence: "I sincerely ask the U.S. Government, Mr. Biden, and the President to [have] more concern of the families of prisoners of conscience and help us to free our fathers! And I ask for an Oval office meeting with President Obama for a more direct and detailed conversation in order to reunite our families."

Ti-Anna Wang, born in 1989 and named after the Tiananmen Square democracy movement and massacre, called attention to the plight of her father, Dr. Wang Bingzhang a political prisoner currently serving a life sentence and in solitary confinement in China. Her father is a New York-based permanent U.S. resident and a prisoner in the 11th  year of a life sentence for his prodemocracy activism. He was kidnapped in Vietnam and forced back into China where he was taken into custody by Chinese police and convicted in a sham trial.

"I unabashedly ask the leaders of the US government, including President Obama, Vice-President Biden, Secretary of State Kerry, and Ambassador Powers to seize all diplomatic opportunities with China to seek the release of our fathers," TiAnna Wang said. "I believe high-level diplomacy is our fathers' best chance for freedom, and their releases must be discussed on occasions such as Vice-President Biden's recent trip to Beijing.

"I ask the Obama administration to meet with the five of us and listen to our first hand experiences as witnesses of China's human rights abuse," Ti-Anna Wang said. "I want our stories and our efforts to be heard, acknowledged, and taken into serious consideration when the US devises its foreign policy."

"Here in the United States, many families are getting ready to gather for Christmas and New Year's," said Danielle Wang, whose father Zhiwen Wang is one of the millions of Falun Dafa practitioners in China under persecution by the Chinese government. "In China, we would be starting to look forward to Chinese New Year. But this time of year is always bittersweet for me, because of the painful absence in my family since my father's summary arrest and detention in July of 1999.

"A lot happens in 15 years," Danielle Wang said. "Being away from Dad and growing up without him has been so hard. I hope that the decisions I've made in my life would make him proud. At my wedding we placed a single rose on his chair to symbolize his presence and celebrate his place in my life. I continue to keep that rose safe and present until the day we meet again and I can hand it to him and tell him the story of how he has always been with me."

"Far too many of us who live in freedom often fail to exert ourselves in a meaningful way to assist prisoners of conscience and their loved ones—in China and elsewhere," Smith said, co-chair of the U.S. Congressional-Executive Commission on China. "Far too many of us fail to empathize with their plight.  Or to see what's just below the façade of the purported harmonious society. The repression is systematic, pervasive, unrelenting and unnecessary—the people of China love their nation and deserve better treatment."