From Wikipedia, the free encyclopedia

The film was produced in 1989 for the 200th anniversary of the French Revolution. It purports to tell a faithful and neutral story of the Revolution, from the calling of the Estates-General to the death of Maximilien de Robespierre. The film was high-budgeted and boasted an international cast. It was shot in French and English.

The film was generally considered rather historically accurate. Among the few departures from the historical facts, the executioner Charles-Henri Sanson was shown executing both Louis XVI and Marie-Antoinette. The elder Sanson actually only executed the King, while his son executed the Queen. Some critics pointed, however, that the film suffered from its neutrality, which resulted in a lack of point of view and in some incoherences. The first part, which dealt with a rather complex historical subject, was also criticized for its disjointed pacing. The second part was considered more gripping and dramatic. Jean-François Balmer received great praise for his portrayal of a rather sympathetic Louis XVI and Andrzej Seweryn was considered very convincing as Robespierre.

The film was not a box office success in France, as the celebrations for the Revolution's bicentennial were not attracting much audience.

AMSTERDAM— The importance of sex has never been underestimated in the Netherlands, a country where convicts are allowed conjugal visits and prostitution, although technically illegal, is tolerated.

Now the government's top advisory agency - the Raad van State - has indicated that physically handicapped people are also entitled to sexual relations, and at the government's expense, if necessary.

In a preliminary decision last month, the Raad van State ruled that the municipality of Noordoostpolder must pay a monthly stipend of 65 guilders ($38) to a handicapped man who has reportedly suffered mental anguish from the absence of sexual contact.

The money is to be used to defray the cost of a once-a-month visit to a "sexual aid worker" who charges 150 guilders for a 90-minute session.

Not surprisingly, the municipality of Noordoostpolder had been resisting the efforts of the 31-year-old man to be compensated for such visits.

"Hypothetically, we can have hundreds of people applying for this kind of aid," said Wouter Jansen, a spokesman for the municipality. "It can create quite a situation here, not only for us but for all municipalities in Holland."

But a spokeswoman for an organization that arranges sexual contacts for the disabled said that the government "should pay if somebody can't afford it.

The nature of the man's disability has not been made public, but he is apparently not seeking the services of a sex therapist - specialists who treat sexual disorders - which in some cases is reimbursable under the Dutch social security system. He wants instead to visit a woman who provides sex to handicapped people, but he is unable to afford the sessions.

A psychologist said in a report that the man's mental health would greatly improve if he had sex once a month.

The man, who lives in a home for the handicapped, has been fighting for more than a year to obtain financial assistance for the visits.He originally sought help from social security and when that failed, he went to Noordoostpolder officials. They turned him down, which prompted an appeal to the provincial government of Flevoland. The provincial authorities ordered Noordoostpolder to pay up, which led officials there to appeal the decision to the Raad van State.

The advisory agency ordered Noordoostpolder officials to assist with the payments while it deliberated on a permanent solution, a process that could take months.

ADutch newspaper reported that six or seven municipalities in the country were already reimbursing patients for sexual services. But a spokesman for one of the municipalities said the local government was paying only for a patient's sex therapy, not for visits to a sexual aid worker. 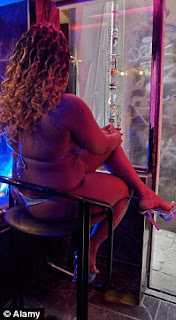 Red light district: A man with learning disabilities will use taxpayers money to visit an Amsterdam prostitute

A 'man of 21 with learning disabilities has been granted taxpayers' money to fly to Amsterdam and have sex with a prostitute.
His social worker says sex is a 'human right' for the unnamed individual - described as a frustrated virgin.
His trip to a brothel in the Dutch capital's red light district next month is being funded through a £520million scheme introduced by the last government to empower those with disabilities.
They are given a personal budget and can choose what services this is spent on.
The man's social worker, who spoke on the condition of anonymity, said his client was an 'angry, frustrated and anxious young man' who had a need for sex.
'He's planning to do more than just have his end away - he's having a holiday,' he said.
'He has been to two sexual health and sexual awareness courses and basically wants to try it.
'The girls in Amsterdam are far more protected than those on UK streets. Let him have some fun - I'd want to.
'Wouldn't you prefer that we can control this, guide him, educate him, support him to understand the process and ultimately end up satisfying his needs in a secure, licensed place where his happiness and growth as a person is the most important thing?
'Refusing to offer him this service would be a violation of his human rights.'
Paying for sex is not illegal but soliciting sexual services, kerb crawling and paying for sex with women who have been coerced into prostitution is.
The social worker added: 'Who says he can't do what he wants? We can't place restrictions on a young man who wants to experience the world.'
The trip emerged in data from Freedom of Information requests which revealed that many councils are using the money from the government's Putting People First scheme to pay for prostitutes, visits to lap dancing clubs and exotic holidays. 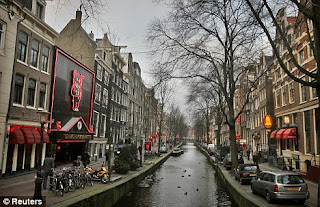 Sex holiday: The unnamed 21-year-old will enjoy a holiday in Amsterdam as well as visiting a prostitute

Another man who has a brain injury has even had sex work built into his council care package.
This is designed to teach him to become sexually 'self-reliant' after his wife left him and took all their money.
It has increased his confidence and restored his faith in women, care workers said.
Critics yesterday said the use of taxpayers' money to fund sex trips abroad as 'deeply worrying'.
In Greater Manchester and Norfolk, social care clients have used their payments for internet dating subscriptions.
In one year, a man from Norwich who suffers mental health problems received a holiday to Tunisia, a subscription to an internet dating site, driving lessons and expensive art materials.
This was on top of state benefits. He claimed he needed 'some time out, some rest and a change of scenery' after a mental breakdown.

He also argued that a break in Tunisia with a friend was cheaper than a week in institutional care.
A survey by The Outsiders and TLC Trusts - groups which campaign for the sexual rights of people with disabilities - found most local authorities said they did not 'condone' transfer of their funds to pay for sex.
But of 121 councils who responded, 97 per cent said they had no offical policy on the topic.
Instead, they left decisions to the discretion of their social workers and junior managers.
Nevertheless, 53 per cent of the councils were said to have a strategy that 'explicitly empowered' disabled people to pursue their sexual aspirations.
Neil Coyle, director of policy at Disability Alliance, said most people with disabilities did not want or expect the state to pay for sexual services.
'Public bodies don't exist to find people sexual partners,' he said.
'When people go to councils for help, they are looking for essential services to maintain some level of dignified existence - help to dress and wash.'
Matthew Elliot, chief executive of The Taxpayers' Alliance, said: 'Many taxpayers will be appalled and offended that money intended for social care has been used in this way.
'What's more, it's deeply worrying that this scheme has been so vulnerable to these abuses.
'It's essential that where public funds are involved, there are the sort of checks and balances in place that prevent money being wasted in this way.'
But Liz Sayce, chief executive of disability network Radar, agreed with the social worker the desire for sexual relations was a matter of human rights.
Cases involving payments should be carefully examined on a 'case by case' basis, she added.
A Department of Health spokesman said: 'Money allocated through Putting People First should be used by councils to help people to live independently.'