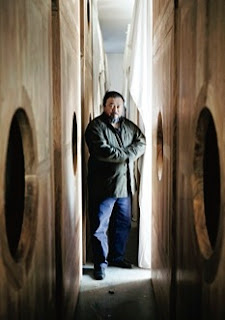 Ai Weiwei has produced a low-tech form of social networking. The long-running tussle between China's most famous artist and his state entered a curious new stage recently, when the government served him a $2.4-million bill for tax evasion, to be paid in full within fifteen days. Every day that he is late adds $31,640. He spent two and a half months in jail this year on tax charges. (He has maintained that the tax charges are puzzling, because investigators only asked him about his political activities.)

When news of his fifteen-day deadline began to circulate, his fans struck back with the same thing that China is providing in large quantities to Europe and America these days: money! Supporters began to send donations by PayPal; they wrapped cash around fruit and delivered it to his doorstep; they folded hundred-yuan notes into paper planes and sent them sailing over the wall into his Beijing compound. On Tuesday, the reporter Melissa Chan tweeted, "Man, wife, and baby just showed up in Mercedes outside Ai Weiwei's studio/home looking to contribute." The list of donors is a manifesto of its own; it includes people like Zhao Lianhai, who became a food-safety activist after his baby fell ill in 2008 from infant formula that had been tainted with melamine to appear to have more protein.

His phalanx of critics have leapt into action. By Sunday, his account on the Chinese version of Twitter had been deleted. The Global Times asked why any famous artist, with an apartment in Berlin, needs to raise money from the public, adding, ominously, "Since he's borrowing from the public, it at least looks like illegal fund-raising." Then it added the underlying point between the usual critique: "[T]hese people are an extremely small number when compared with China's total population. Ai's political preference along with his supporters' cannot stand for the mainstream public, which is opposed to radical and confrontational political stances."

And therein lies the subversive arithmetic in all this: Soon, both he and his critics will know precisely how many or how few people stand with him. By Tuesday's end, according to his assistant's public accounting, his supporters had donated 6,082,451 yuan—more than 958,229 dollars, putting him nearly halfway to covering his bill. (The prospect of him being charged with illegal fundraising is especially intriguing, as one commentator to the Global Times article points out: "How is asking someone to lend you money 'illegal fundraising'? This happens every second of every day in China.")

So far, not much about the official response is surprising—except one line from the Global Times editorial: "In China, more people are imitating Ai's approach than ever before." Setting aside the contradiction with the previous point in the same story that "these people are an extremely small number," it's hard to tell if that line should be read as a lament or a warning.

Photograph by Ian Teh.