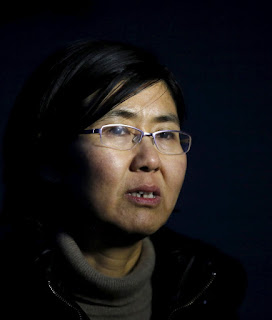 原文She was a quiet commercial lawyer. Then China turned against her.

Human rights lawyer Wang Yu talks during an interview with Reuters in Beijing in this photo from March 1, 2014. China's state media last month accused Wang, the country's most prominent female human rights lawyer, of "blabbering about the rule of law and human rights." Police detained her July 9. (Kim Kyung-Hoon/Reuters)

BEIJING — It could be said that Chinese authorities created Wang Yu — or at least the Wang Yu who has become a thorn in their side.

She was a mild-mannered commercial lawyer working on patent disputes and the like until an incident at a train station in Tianjin at the end of 2008. She had an altercation with station employees after they stopped her from getting on a train, even though she had a ticket, and was then assaulted by several men.

But several months later, it was Wang — not the men who beat her — who was charged with "intentional assault." After a lengthy and questionable legal process, she spent 21/2 years in jail.

There, she saw how prisoners were forced to work for no pay and heard their tales of being mistreated and tortured, her friends and associates say. When she emerged in 2011, Wang had transformed into a human rights advocate, taking on some of the most high-profile cases in China.

"When she came out, she quickly became a part of this movement and really threw herself into it," said Eva Pils, an expert in Chinese law at King's College London, who spoke to Wang a few weeks ago.

Wang is one of a group of more than 100 lawyers detained in a highly coordinated raid across 19 Chinese provinces last week, part of an effort to "smash a major criminal gang" that was "seriously disturbing social order," according to state media.

Wang for a time represented Ilham Tohti, a prominent Uighur intellectual who was sentenced to life in prison last year on charges of advocating separatism and inciting ethnic hatred, criticizing the government and voicing support for terrorism.

She also defended the "Five Feminists" who were charged in March with creating a disturbance as they planned a public awareness campaign against sexual harassment to coincide with International Women's Day.

And there were the members of the banned Falun Gong spiritual group whom Wang was supposed to be representing, but she was repeatedly denied entry to the courthouses.

After one instance in the northern province of Heilongjiang last year, when she was denied access to a Falun Gong client, she and a colleague stood outside the Mudanjiang police bureau holding signs saying, "Lawyers demand the right to meet with clients."

Few people would have seen the pair outside the remote police station in a city near the Russian border, but Wang's colleague put a photo of the two of them on Weibo, China's version of Twitter, and it soon spread.

It was this work — and her use of social media to take it to the masses — that led to her arrest last week as part of a coordinated, nationwide crackdown on human rights lawyers.

"I think she really made the government angry because of her human rights work," said Teng Biao, one of China's best-known civil rights lawyers and a visiting scholar at Harvard Law School. "These lawyers are well organized and they are well connected. They can mobilize people through social media."

Arrests of human rights lawyers are hardly uncommon in China. As of Thursday, a total of 215 lawyers, law firm staff members and human right activists were detained, arrested or incommunicado in the country, according to the Hong Kong-based China Human Rights Lawyers Concern Group.

But analysts said the scale of last week's mass detentions, which came amid a broader suppression of nongovernmental organizations and other civil society groups under President Xi Jinping, was astounding.

"This is the most notable crackdown since the one after the 2011 'jasmine' protests that followed the Arab Spring, when there was concern that the pro-democracy movement would spread to China," said William Nee, China researcher at Amnesty International. "But this has far surpassed it in both the scope of the crackdown and the consequences for certain lawyers."

Although Wang, 44, and other lawyers from the firm where she works were part of a broader group of lawyers detained, her situation has attracted public attention because she was one of a few who had been singled out for criticism.

Last month, the state-run Xinhua News Agency ran an unsigned commentary about Wang that was apparently designed to smear her reputation. "This arrogant woman with a criminal record turned overnight to a lawyer, blabbering about the rule of law, human rights, and justice, and roaming around under the flag of 'rights defense,' " it said.

Those who know her paint an entirely different picture.

Li Tingting, a lesbian campaigner on women's issues who was one of the "Five Feminists," said that Wang is a patient and committed lawyer. "She works very hard. She's always on the road. Her bag is always stuffed," Li wrote on Weibo. "She is very thin, and every time I see her carrying that heavy bag, I note that she works so hard but she never complains."

Maya Wang of Human Rights Watch said the detained attorney is no firebrand. "She's softly spoken and she's very serious about her work," she said. "First and foremost, she's a lawyer. The entire crackdown on her and her law firm is a political crackdown against lawyers who are just trying to do their jobs in implementing the rule of law."

But the authorities used the train station incident against Wang. "The fact that she has this conviction, even as dodgy as it is, makes her a target," Pils said.

When the state commentary appeared, Wang and her colleagues knew it was a sign of something bad to come.

On July 8, Wang saw off her husband, human rights activist Bao Longjun, and their 16-year-old son, Bao Zhuoxuan, at the airport. They were heading to Australia, where the teenager was set to go to school.

That night at her home, the electricity went off and the Internet connection went down suddenly at about 3 a.m., she wrote in a text message to a group of fellow lawyers. Then she heard the sound of someone picking the lock on the door.

"I looked outside through the peephole but it was all dark. Some people were speaking in low voices but I couldn't hear them clearly," she texted. "Neither my husband nor my son picked up their phones."

It turned out that they had been arrested at the airport.

When human rights activists tried to call Wang after receiving her texts, she didn't answer.

Wang and Bao have been in detention since, although their son was released into the care of his aunt, but not before his passport was confiscated.

Sensing that she was likely to be picked up, Wang had said last month that her work meant that "many of the rich and powerful bear a grudge against me."

"The truth cannot be long hidden," she wrote in a statement responding to the Xinhua commentary. "I believe that during this time of enlightenment and rapid development of Internet and media, any shameful attempt to smear me is doomed to fail."

Authorities appear to be trying to make sure that doesn't happen.

Searches for "lawyer Wang Yu" and "rights defense lawyers" have been blocked on Weibo, and the only comments about Wang's case have been highly negative ones.

"Such a bad person should have been executed long ago," said one, "and those lawyers who wrote nice things about her aren't any good, either."

Xu Yangjingjing contributed to this report.

This Chinese feminist wants to be the country's first openly lesbian lawyer, and police harassment won't stop her

Anna Fifield is The Post's bureau chief in Tokyo, focusing on Japan and the Koreas. She previously reported for the Financial Times from Washington DC, Seoul, Sydney, London and from across the Middle East.