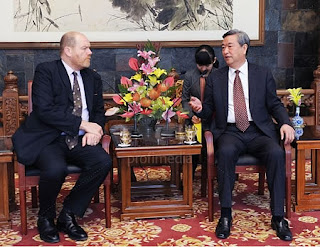 Once again the British Broadcasting Corporation (BBC) has revealed an unhealthy willingness, to parade as fact, China's propaganda, more on that shortly, it has served as a conduit for Beijing's disinformation for a number of years now, influenced and encouraged by the foreign policy objectives of its colleagues in the Foreign Office (equivalent of the State Department) whose task is to maintain positive relations with China at any cost. The BBC's senior executives enjoy trips to Beijing to attend media summits hosted by China's disinformation agency, Xinhua, relations at a senior level are cordial to say the least. As this special cooperation has developed we have witnessed, in BBC reportage, a corrosion of the truth on issues relating to China, a withdrawal of independent and forceful analysis, replaced by a syntax that bears a worrying similarity to the official disinformation of China's Ministry of Foreign Affairs and Information. This is most noticeable on subjects of political sensitivity to the Chinese Regime such as Tibet, East Turkestan and related issues on human rights, such matters as reported by the BBC often repeat China's official position and are virtually absent of critique, balance or an alternate perspective and context.

Such a development must be a source of satisfaction to China's propaganda ministry and its front organization,Xinhua, whose chief and World Media Summit President, Li Congjun wrote in the Party's official Seeking Truthjournal in February 2009:

"We must actively seek out new horizons, new mechanisms, new channels and new methods in the area of outside dialogue and cooperation, particularly, as by the demands of central party leaders, successfully organizing the first meeting of the World Media Summit, building a platform for dialogue among first-rate international media (, further raising the capacity of Xinhua News Agency to make its voice heard in the international news and information sector." (Source CMP) 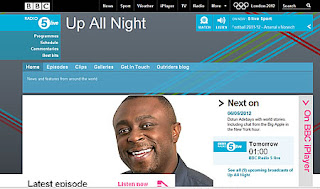 This accommodation reached a new level of appeasement during a late night radio show from BBC Radio FiveLive, a station which has previously been exposed as displaying a bias towards China's official orthodoxy. We are extremely grateful to one of our friends in England for providing details of this latest incident, which was broadcast on May 5 during a program called 'Up All Night' hosted by one Dotun Adebayo.Towards the end of his show the presenter featured the story of Chen Guangcheng, the Chinese activist, noted for his campaigns to expose the forcible sterilization and forced abortions of women in China, who recently sought sanctuary in the US Embassy. Following the usual template of such segments, the show featured a guest, who was presumably invited on the basis of providing an authoritative and impartial analysis, unfortunately in this case the researchers had either clearly not done their homework, were incapable of recognizing a propagandist, or worse simply conformed to an Editorial attitude sympathetic to a pro-China position.

Well listeners surely got that (and how!) as they listened to the comments of a Doctor Robert Lawrence Khun. Before we look at the nauseating disinformation that saturated his commentary it maybe helpful to examine briefly significant and revealing aspects of this individual's résumé. He is described as "an international corporate strategist, investment banker and expert on China" and there's no doubting his credentials regarding his relationship to the Chinese Regime, having cooperated since 1989 with senior Chinese leaders and served as an adviser on economics and other subjects to the Regime. Robert Kuhn is also a senior consultant to China Central Television (CCTV) and Xinhua News Agency, both of which are main channels of official propaganda in China. 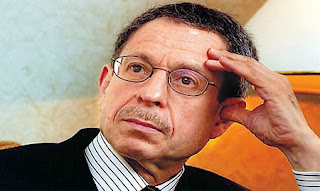 In researching a suitably balanced and objective guest to feature in that item were BBC researchers not troubled by such a curriculum vitae? Did they not pause to question if this individual may in fact have developed a certain bias towards China's Regime, or that his position as adviser to Xinhua was an indication of views somewhat tainted with officially sanctioned disinformation? Yet, with a minimum of scrutiny they would have found expressions of concern regarding the ideology and words of Robert Kuhn. Most recently documented in his florid hagiography of China's Regime titled, 'How China's Leaders Think: the Inside Story of China's Reform and What This Means for the Future'.

An insightful review of this book appeared in Forbes by noted author on China, Gordon C Chang. In a highly critical dismissal of Kuhn's work, which the reviewer notes: "I gave up reading with 401 pages to go. I wanted to stop earlier, after Kuhn stated–on the fifth page of the introduction–that Chinese leaders are not authoritarians. That's demonstrably untrue, but I struggled on for another hundred pages before finally realizing there was no point in reading a work of propaganda…..it's evident that Kuhn is not going to say a critical word about the theoretical underpinnings of present-day Chinese authoritarianism."

There were then serious questions being asked about the impartiality of Robert Kuhn, yet such concerns did not trouble the producers, editors, researchers and presenter of the BBC show 'Up All Night', which allowed this individual a generous platform to air China's toxic propaganda and effectively act as an apologist for a Regime and downplay the case of Chen Guangcheng. The following are extracts taken from the show in question, responding to the assertion by the presenter that Chen was a dissident, Kuhn was at pains to dismiss that and relegate the activist as an 'irritant', a far more pejorative an inaccurate term. He then described Chen Guangcheng's actions in the following manner:

Note the vagueness, along with the the sly implication of an uncertainty to Chen's activities, suggesting such may either have been misplaced, inaccurate or targeting issues which may not have been operating. Yet the entire world knows very precisely what Chen was campaigning against, the human rights violations generated by China's coercive population control program, a widely reported fact in western media. How curiously singular then for this uniquely experienced and knowledgeable scholar of China's political scene to demonstrate such vagueness and hesitancy, clearly it is difficult not to consider that Robert Kuhn would be very aware, something however prevented any clear assertion on the issue, could that be explained by his seeming fondness and tolerance of China's Regime?

This was followed by comments, the nature of which suggested an experienced and willing propagandist for China, referring to the tortuous abuse inflicted upon Chen Guangcheng, which Mr Kuhn presented in the following manner:

"He was treated, as the reports go, very poorly and oppressively by local officials, often times what happens at local levels is not what Beijing and senior leaders would like to see happen. My experience of the Chinese leaders is they are very compassionate..when policies get translated into local areas then it gets more repressive.." (Emphasis Added)

This is a classic application by apologists for China, drenching descriptions in euphemism and extenuation to minimize or deflect from the odious realities of the tyranny of China's regime and then seeking to distance the central government by claiming abuses are the responsibility of over zealous local officials. The truth is that as the harrowing atrocities of the Gestapo could not have operated to the extent they did without the sanction,funding, administration and encouragement of the National Socialist Party, the vicious oppression, human rights violations and censorship cannot operate in China without the authorization, and political and economic support and knowledge of the communist leadership of China's Regime. Not that Robert Kuhn would agree, indeed as loyal friend of the Chinese leadership he calmly assured the program's audience that there is a

"..great deal of public oversight of the Government, the Government just cant do what it used to do in the past" adding that "To some Chinese leaders people like that (Chen) are very helpful today because they are able to put pressure on local officials to change policies which are repressive to people, that the central leaders don't even know about". (Emphasis Added) 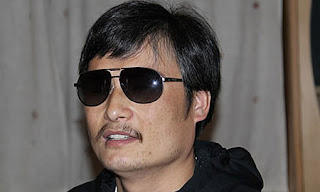 Chen Guangcheng, Not A Dissident According To Kuhn, But An 'Irritant
Image:archivenet

How telling that Mr Kuhn holds the opinion that a totalitarian state, which has invasive and limitless control over every aspect of people's lives, is seemingly so ignorant of its draconian policies, that are imposing widespread oppression and suffering across China. Take the very issue which Chen Guangcheng has been active on, China's notorious population control program, in particular the medical atrocities and human rights violations it forces upon countless numbers of women. Such abuses are well documented and their existence and implementation cannot be ascribed to simply local excess or misreading of state regulation, they are a vital element, without which China's Regime would not be able to have secured, behind the vague euphemism of its national and regional family planning laws and policies, such colossal reductions in the number of of births. It is state imposed violent coercion, financial penalties, loss of homes, confiscation of property and fear which characterizes the very program that Chen Guangcheng has so courageously campaigned against. There is no question that this policy is centrally engineered and approved by the Chinese Regime, the mobilization, administration and funding of the nationwide program of forced sterilizations and forced abortions is not a random or occasional local aberration from some benign government policy, rather the application of a highly coercive program that is imposed and authored by the Chinese government.

It is a matter of great disappointment that once again a mainstream media organization has permitted such obvious propaganda to be presented as fact, without any serious counter-view or challenge. The team responsible for the offending Radio Five Live show have at best been found wanting in terms of being able to identify such a biased and partisan source, at worst they are guilty of assembling a flawed and distorted program that has seriously mislead its audience and denied them a balanced, impartial and factual coverage of a story of great concern and interest to many. This would be in violation of the BBC's stated editorial policies and relevant broadcasting commitments to its license fee payers, anyone  who wishes to lodge a formal complaint about this subject may do so online here: https://ssl.bbc.co.uk/complaints/forms/?reset=